﻿Qatar, where the World Cup is held, is a small country located on a peninsula protruding from the Persian Gulf. The north-south and east-west lengths are only 160 km and 80 km, respectively, and the land area is 11,437 km2. It is slightly smaller than Gyeonggi-do in Korea. It shares a border with Saudi Arabia to the south and the rest to the sea. The population is only 3 million. Among them, 400,000 are native, and the rest are immigrants from India, Pakistan, Iran, Africa, and Southeast Asia. Qatar became a rich country in the Middle East in 1989 thanks to the world’s largest natural gas field, ‘North Field’. North Field contains 10% of the world’s total natural gas reserves. Qatar ranks third in the world in natural gas reserves and second in exports of liquefied natural gas (LNG). According to the International Monetary Fund (IMF), Qatar’s GDP per capita is $82,886, ranking fifth in the world after Luxembourg, Ireland, Norway and Switzerland. Qatar was able to host the World Cup by spending 200 billion dollars (approximately 265 trillion won) thanks to the funds earned from exporting natural gas.

While Qatar is hosting the World Cup, it signed the longest and largest contract ever with China to export LNG worth 61 billion dollars (about 80.831 trillion won) at 4 million tons per year for 27 years from 2026. Saad Sherida Al-Kabi, Qatar Energy Minister and CEO of Qatar Energy, said, “The supply to China is the longest and largest LNG export contract ever. will,” he said. Last year, China imported 79 million tons of LNG, up 12 million tons from 2020, overtaking Japan to become the world’s largest LNG importer. China’s largest LNG importer is Australia, followed by Qatar.

The LNG that China will import is produced from the East Gas Field (NEP) in Qatar’s North Field. Development of the Northfield East gas field began in 2020. When production starts in earnest from 2026 at the gas field, Qatar’s annual LNG production is expected to increase from 77 million tonnes to 110 million tonnes, overtaking Australia, currently the world’s largest producer. It is very unusual for China to sign a gas supply contract with Qatar while European countries are actively sending love calls to Qatar to find a source of income to replace Russian gas after the Russo-Ukraine War.

It is because of Iran that China signed a gas supply contract with Qatar. The Qatar North Field is an offshore gas field shared with Iran’s South Pars. The sea area where the two gas fields are located is a total of 9700 km2. Based on territorial waters, Iran considers 3,700 km2 of these waters and Qatar, 6,000 km2, respectively, as their own territory. The two countries should seek mutual understanding when developing gas here connected to the seabed.

Qatar has had close ties with Iran, the leader of the Shi’ites among the Sunni Arab states in the Gulf region. Because of this, Qatar once severed ties with Saudi Arabia. China has used this to maintain good relations with Iran as well as Qatar. On the other hand, the United Kingdom, Germany and France are imposing sanctions on Iran because of the nuclear issue. In particular, China is actively pursuing security cooperation, such as promoting the construction of a naval base in Qatar, where the largest US military air base in the Middle East is located. The reason the United States dispatched Secretary of State Tony Blincoln to Qatar for security strategy talks is also intended to prevent China from actively advancing.

China is also sending friendly gestures to the United Arab Emirates (UAE), which is said to be its closest ally along with Saudi Arabia in the Middle East. Maritime trade between China and the UAE has increased significantly in recent years through new waterways. In fact, the ‘Middle East-Far East Route’, which directly connects Qingdao Port in Shandong Province, China, and Khalifa Port in Abu Dhabi, UAE, was opened on November 11, and ships from both countries are coming and going. Excluding oil, trade between China and the UAE exceeded 60 billion yuan (approximately 11.12 trillion won) last year, a 78.5 percent increase over the past 10 years. China and the UAE also agreed to send the UAE’s rover (mobile exploration robot) to China’s Chang’e 7 space probe to the moon in 2026. The UAE also signed a contract to purchase 12 L-15 military aircraft from China, and plans to purchase an additional 36 in the future. The L-15 is a model used as a light attack aircraft and trainer. The UAE also purchased Winglong, an unmanned attack aircraft developed by China’s Chengdu Aircraft Industry Group. The UAE, with a population of 9 million, has a U.S. air base and 5,000 military personnel are stationed there. 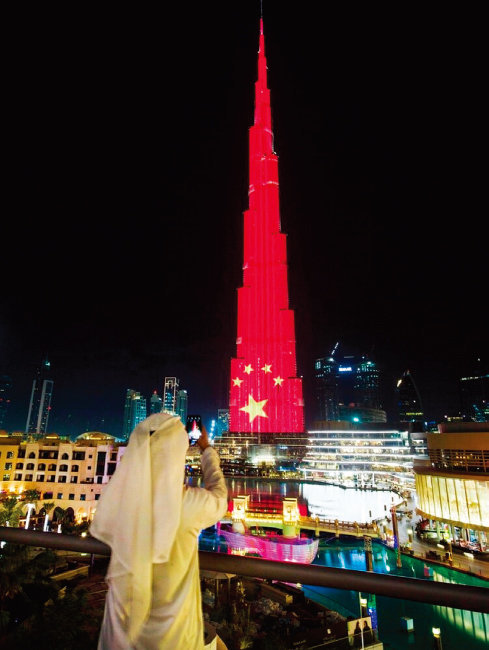 A five-star red flag was lit at the Burj Khalifa in Dubai, United Arab Emirates (UAE) to emphasize friendship with China. [The National]
UAE expresses displeasure at US intervention

The reason why the relationship between the United States and the UAE has been estranged recently is because of the F-35A stealth fighter. The U.S. demanded that the UAE not buy 5G equipment from China as a condition of selling F-35A stealth fighter jets, but it was rejected. Eventually, the US canceled the sale of the F-35A fighter jet. When the UAE showed a move to allow China to build a naval base near Khalifa Port, the US strongly opposed it and even put pressure on the UAE. The UAE said it would not allow the construction of a Chinese naval base, but showed considerable displeasure with the US for intervening in its sovereignty. Perhaps for this reason, the UAE participated as a dialogue partner in the Shanghai Cooperation Organization (SCO) led by China and Russia in September. China is offering carrots, saying that it actively welcomes the UAE becoming a member of the SCO in the future. China has also revealed its intention to provide various weapons to the UAE. Li Xiaojian, director of the Sino-Arab Institute at Ningxia University in China, emphasized, “If Middle Eastern countries cannot buy weapons from the US, China can supply them.”

As in the case of the UAE, China is scrambling to attract them to its side by taking advantage of the cracks in relations between some countries in the Middle East and the United States. Middle Eastern countries had a close relationship with the United States during the presidency of former US President Donald Trump, but since President Joe Biden took office, conflicts have arisen over oil production cuts and human rights issues. The South China Morning Post, an English-language Hong Kong newspaper, pointed out that “China is emerging as an important partner as Middle Eastern countries are wary of relying on the US.”

For China, this situation presents a golden opportunity. In fact, China is investing its own capital and companies in major construction projects such as the construction of a new administrative capital in Egypt, the creation of a pilot complex in the UAE, and the water supply project in Qatar, with the Belt and Road Initiative at the forefront. In addition, China is reaching out as a cooperative partner in the plan to break away from the ‘oil dependent’ economic structure, which is the biggest challenge for Middle Eastern countries. China has cutting-edge technologies in renewable energy, artificial intelligence (AI), and aerospace. Some countries in the Middle East, such as the UAE, are also showing a willingness to utilize Chinese technology as long as it meets their economic interests in security cooperation with the United States.

Will the US falter Middle East supremacy?

Saudi Arabia is expected to be a key target in China’s strategy to strengthen relations with Middle Eastern countries. Chinese President Xi Jinping is promoting a plan to visit Saudi Arabia to hold summit talks with Prime Minister and Crown Prince Mohammed bin Salman on the occasion of summits with Arab countries this month. If Xi visits Saudi Arabia, it is certain that China’s influence in the Middle East, where the United States has long maintained hegemony, will expand.

Relations between the United States and Saudi Arabia have deteriorated as much as they could since OPEC+ (Organization of the Petroleum Exporting Countries Plus), a consultative body of major oil-producing countries, decided to cut large-scale production in October. Strengthening relations between China and Saudi Arabia could become a new variable in the situation in the Middle East. At the time, the United States criticized Saudi Arabia for its decision to cut oil production, saying it was an act that benefited Russia, but Saudi Arabia argued that it was purely based on economic logic. Moreover, relations between the United States and Saudi Arabia have deteriorated since President Biden pointed to Crown Prince bin Salman as behind the 2018 murder of Saudi dissident journalist and columnist for the Washington Post, Jamal Khashoggi. More importantly, Saudi Arabia is showing an intention to cooperate with China. China is the largest importer, accounting for 27% of Saudi oil and crude oil exports. Wang Jin, a professor at Xibei University in China, predicted that “the two countries can cooperate in various technological fields beyond the energy sector, including the space sector.”

South Korea and Japan at the end of negotiations on compensation for victims of forced labor… Visualization of the summit at the beginning...