Facebook
Twitter
Pinterest
WhatsApp
- Advertisement -
zoom inBaek Seung-ho (left) celebrates after scoring a goal in the round of 16 match against Brazil at the Qatar World Cup held at the 974 Stadium in Doha, Qatar on the 6th. Doha = AP Newsis

Brazil, the strongest in the world, was strong. Korea, which succeeded in advancing to the round of 16 for the second time in 12 years, failed to advance to the quarterfinals on its first visit.

Korea lost 1-4 in the round of 16 against Brazil held at the 974 Stadium in Doha, Qatar on the 6th. Korea, which reached the semi-finals in the 2002 Korea-Japan tournament, had its best performance in the visiting tournament, the round of 16 in the South African tournament in 2010 and the round of 16 in this tournament. They aimed to advance to the quarterfinals on their first visit, but their opponent, Brazil, had a high wall. Korea was far from normal condition that day, with players looking visibly tired. The lack of time to recover after the third game against Portugal had a big impact. He tried to block the attack of Brazil, the number one player in the FIFA rankings, armed with splendid personal skills, but it was not easy.

When the players greeted each other after each national anthem before the game, Son Heung-min hugged Neymar and pledged to do well. Hwang Hee-chan, who scored a come-from-behind goal for Korea as a substitute in the second half of the group stage match against Portugal, was the starter that day. Kim Min-jae, the core of Korea’s defense, who was off the bench in Game 3 due to an injury, was also included in the starting list that day. Neymar, who suffered an ankle injury in Brazil’s first group match against Serbia, played as a left midfielder.

zoom inHwang Hee-chan (center) tries a shot in the round of 16 match against Brazil at the Qatar World Cup held at the 974 Stadium in Doha, Qatar on the 6th. Doha = Newsis
- Advertisement -

Brazil launched an onslaught from the beginning of the first half and scored quickly. In the 7th minute of the first half, Vinicius Junior scored the opening goal by kicking the ball from the left side of the goal into the right corner of the goal. Brazil won a penalty kick three minutes later when Jung Woo-young tried to clear the ball and kicked Vinicius. Neymar became the kicker and succeeded. Brazil’s third goal was scored by Son Heung-min and Hischarlisson, who are eating together at Tottenham (England). In the 29th minute of the first half, he bounced the ball with his head several times near the penalty arc before passing to Rafinya. Rafinha passed to Thiago Silva, and in the meantime, Hischarlisson, who was rushing in, received the ball, bypassed the defender, and scored. In the 36th minute of the first half, Lucas Paqueta shook the net with a non-stop shot. 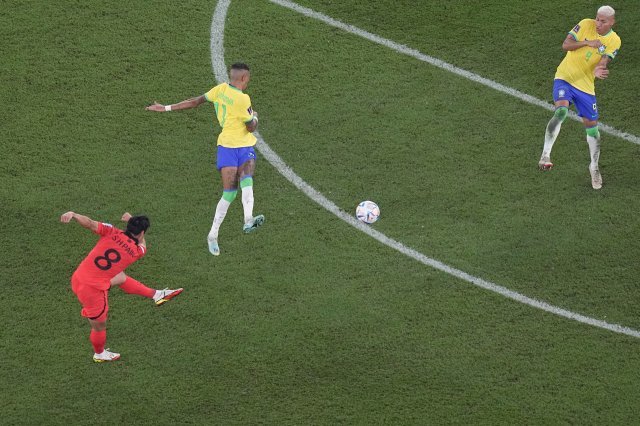 zoom inBaek Seung-ho (left) scores a goal in the round of 16 match against Brazil at the Qatar World Cup held at the 974 Stadium in Doha, Qatar on the 6th. Doha = AP Newsis

With the start of the second half, Korea replaced Jung Woo-young and Kim Jin-soo, who were heavy, and put in Son Jun-ho and Hong-chul. Hongchul stepped on the World Cup stage for the first time that day. Korea missed a chance to score in the 7th minute when Son Heung-min’s shot hit the Brazilian goalkeeper’s shoulder. Korea had a few good chances in the opponent’s half, but the players showed exhaustion as they couldn’t keep up with the ball.

4 minutes of additional time were given in the second half, but Korea could not score any more goals and ended this tournament.

A body cam video of Nicholls, a black driver...
Previous article
‘World’s strongest’ Brazilian wall was high… South Korea lost 1-4, failed to advance to the quarterfinals
Next article
SportWorld Cup: Tite does the pigeon dance and shakes up social networksIn Brazil’s game in the round of 16 of the World Cup, coach Tite surprises by doing the pigeon dance with the players today at 17:54