Why did that Japanese youth shed blood in the Korean War?

Facebook
Twitter
Pinterest
WhatsApp
- Advertisement -
Hiroshi Miyamura, a Japanese-American who received the highest military service medal in both Korea and the United States for killing more than 50 Chinese soldiers alone during the Korean War. He is holding a portrait of himself when he was in his 20s when he participated in the war. Source U.S. Congressional Medal of Honor website

“Are you Corporal Miyamura?”

On August 20, 1953, right after the ceasefire in the Korean War, Corporal Hiroshi Miyamura got off a Chinese Army truck and heard a voice calling him. Miyamura, who is 178 cm tall, stood up with a lean body weighing less than 45 kg. A white officer who came across a dirt road in the Demilitarized Zone (DMZ) where a prisoner exchange was in progress reached out to him. As soon as he saw the Stars and Stripes (American flag) embedded in the officer’s uniform, Miyamura’s tears began to well up.

On the night of April 24, 1951, two and a half years ago, Miyamura could not forget the sound of Chinese gongs that gradually grew louder. He participated in the Korean War as a member of the US Army and guarded an outpost near Seoul. That night, about 1,000 Chinese troops surrounded his squad after devastating the squad next to him. Miyamura, who was his squad leader, forced all 15 members of his squad to retreat to avoid annihilation. Then he stayed alone and fired his machine gun at the Chinese. When he ran out of bullets, he grabbed his bayonet and ran into enemy lines.

When he regained consciousness a few days later, Miyamura was captured by the Chinese. He was seriously injured by a grenade thrown by a fallen enemy soldier. After being held captive for 28 months, he returned to the United States and was awarded the highest military service medal in both Korea and the United States. The medal reads, “Killed over 50 Chinese soldiers before running out of bullets.” 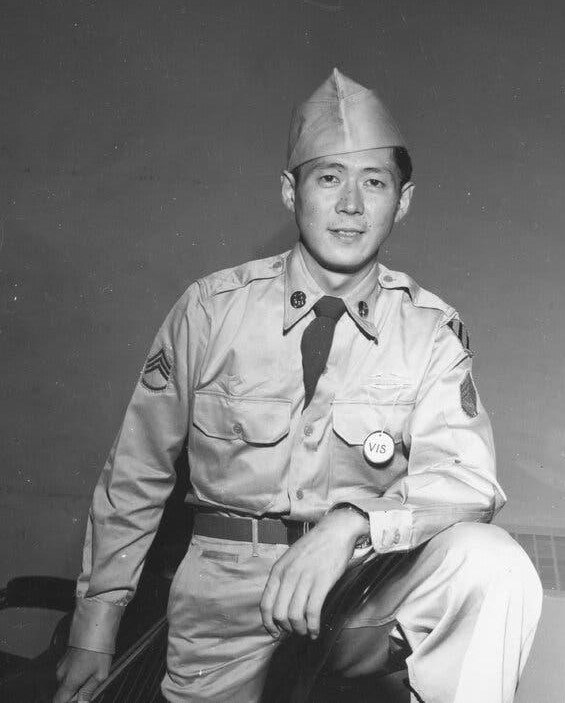 Returning to the United States after being held captive by the Chinese Communists for 28 months, Miyamura was discharged as a sergeant in the US Army in 1953 at the age of 28. Source US National Archives

Miyamura decided to enlist as he watched his neighbors being loaded onto a train and sent to a concentration camp. Proving he was a loyal American fighting for America was a survival instinct shared by young people of Japanese descent at the time. In the United States, they were suspected of being spies with connections with Japan, and in Japan, they were stigmatized as traitors to their country. The 100th Infantry Battalion and the 442nd Regiment of the U.S. Army, composed mainly of Japanese descent, were dispatched to Europe during World War II and made a remarkable contribution against the Nazi German forces. Both units have received the most honors in the history of the Army. 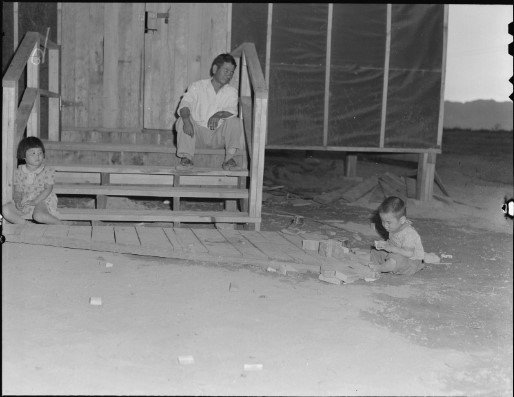 A Japanese concentration camp set up in Poston, in the desolate desert of Arizona, USA. After the Japanese attack on Pearl Harbor, Japanese Americans lived in isolation from American society from 1942 to early 1945. Source US National Archives

The Japanese concentration camps, which were operated for three years from 1942, served as an opportunity for Japanese people living scattered throughout the United States to awaken and solidarity as ‘Japanese Americans’.

Chinese immigrants in the United States also have a watershed in establishing their identity as ‘Chinese Americans’. This is the case of Vincent Chin in 1982. Vincent, then 27 years old, was killed by white men while partying at a bar in Detroit, USA ahead of his wedding. The former car factory workers hit Vincent on the head with baseball bats, saying, “We lost our jobs because of guys like you.” It was an obvious racial hate crime, but the main culprit was sentenced to three years’ probation and the accomplice was fined $3,000.

Korean Americans were reborn as ‘Korean Americans’ starting with the 1992 Los Angeles (LA) riots. As stores like their lives burned down and Koreans died amidst the ignorance of the US government, the Koreans who had come to their own lives felt the need for a united voice. 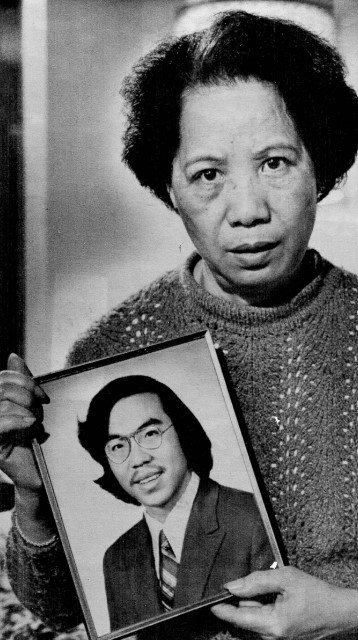 His mother holds a portrait of Vincent Chin, a Chinese-American who was beaten to death by white men at a bar in Detroit, USA, before his wedding in June 1982. When the culprit was fined $3,000 with a cotton bat, Chinese immigrants fiercely protested, saying, “The court issued a license worth $3,000 without penalty for killing an Asian.” Source: ‘Vincent Chin Death 40th Anniversary’ Commemoration Committee 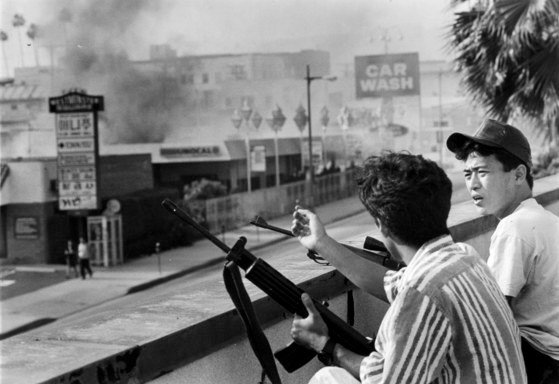 During the Los Angeles riots that began on April 29, 1992, the stores that Koreans had worked for their entire lives were looted or burned. Armed robbers and mob attacks put their lives at risk. As the U.S. government ignored the situation, Koreans took up guns to defend themselves. Korean Americans call the LA riots ‘4·29’.

Asians, who have quietly adapted to American society, have been seen as a ‘model minority’ and ‘invisible immigrants’. In the midst of this, when former U.S. President Donald Trump targeted the Chinese for anger after Corona 19, Asians became easy scapegoats.

Coincidentally, the common denominator of potential victims of hate crimes is uniting Korean, Chinese, and Japanese Americans as ‘Asian Americans’. The Asian Hate Crime Prevention Act, which went into effect last year, was co-sponsored by Chinese and Japanese lawmakers, and was created with the participation of four Korean-American lawmakers, including Andy Kim. 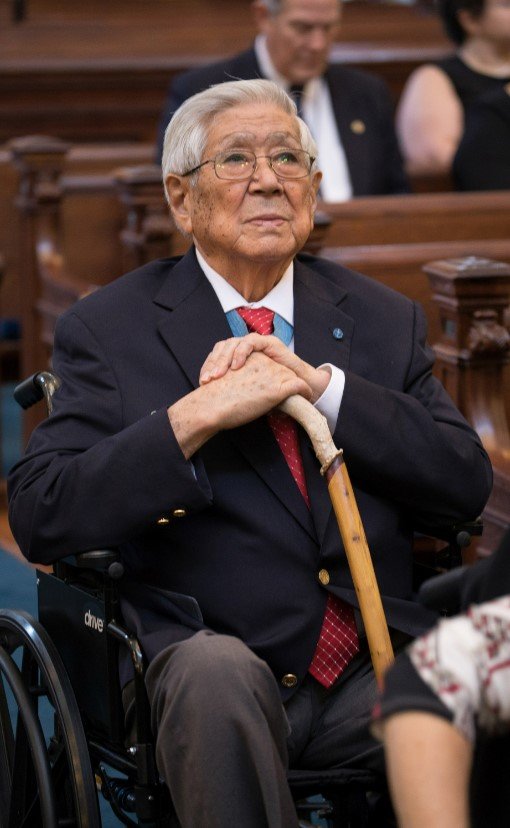 A veteran of the Korean War, Mayamura returned to her hometown of Gallup, New Mexico, where she operated a gas station for over 30 years. It is said that the trauma of the war lasted a lifetime. Source U.S. Congressional Medal of Honor website

Miyamura, who returned from the Korean War, died on the 29th of last month at the age of 97. The fact that he came to a country that suffered from the colonial rule of his motherland and shed blood was close to a struggle against the United States to prove the value of existence as a foreigner in the United States. These days, Asians in America still feel and live a fear that is not very different from the anxiety he must have felt at the time.

South Korea and Japan at the end of negotiations on compensation for victims of forced labor… Visualization of the summit at the beginning...